This morning my mom woke up early and me too. But I fell asleep again, after having reorganized my pillow and myself in another angle. My mom said it had rained, and afterwards she couldn’t sleep anymore as I was in the way.
Just before 9 my mom came back with breakfast and I was out of the tent in time. She said she had been greeted in German by our dutch neighbours, but they had a second look at the orange ‘Holland’ Tshirt she was wearing and probably wondered. Never mind, it was still early :)
We ate our Pain au Chocolat and Croissants, as well as a bit of Banette with my favorite Gelee de Myrthe. And ofcourse the pate de Chataigne, marmelade de Figues et Noix and Clementines. As desert I took the Canistrelli avec gout de Citron while observing the ants and the wasps dealing with last nights leftovers. It was pretty amazing to watch them at work, trying to get as much as possible from the chicken. One wasp even took off with a string of chicken, but then got smashed back as the string was still attached to the bone. Which was kind of funny. It then tried to chew off the other half and when another one showed up it ended up with nothing. But they kept on coming back, in between the few raindrops.
My mom had secured the tent a bit more, so there would be enough distance between outer layer and inner layer of the tent, to ensure the inner side wouldn’t become wet when it would really start to rain. But so far, not much, just a few drops.
I went a few times to the football fields, but there were not many kids. On my way back I saw a license plate I knew, starting with “DA” as well, and I then found out that they were from our neighbouring village. Driving 1000km and then still getting stuck next to our “neighbours” is quite funny. We also have a couple from Heppenheim standing opposite of us, they came here by motorbike. Quite a differrence as getting here dry by car I can imagine.
All the time I wanted to go to the beach, but my mom had planned different. She told me to pack my stuff to walk, and when we were ready, packed with shoes instead of flipflops, backpacks with water and something to eat, we went in the car and drove all the way up through the east side of Calvi, along the airport to the Foret de Bonifatu. The road was horrible and we had some deep bumps, but at the end we found a parking place which we then used after a bit of overthinking the costs of parking illegally but for free.

So with paying for the parking lot we also got a little map and instructions which roads we could walk. These were the big crossings from the Mare e Monti, the trails Corsica is famous for. We decided to go for a 4 hour trip, but that one was closed due to danger of bushfires. So we took the Sentier de Boucle de Candia.

This was supposed to be around 3.5 hours, but it felt so much longer. And shorter as well – we’ve seen so much interesting things.

First of all it was the waterfall which reminded us of the Gorges de la Restonica, but then less cold.

And then we went down to the river, there was a huge rock in the river near the waterfalls and the water was soo fresh and clear.

Then we followed a path which was wide and it was full of lizards, so I stayed behind trying to catch a few.

Until our track moved away from the river, from there on it went up steep. It was called the Boucle de Candia, and we split our roads from the Grande Randonnee not much further.

We sat down for a little snack with the local sausage, saucisson de Porc, and loads of water.

Our track was marked with red stripes and it went pretty much up and down.

The road went through a nice , rare green forest into a quite rocky bit where there were lots of cliffs and hollow rocks.

On some places we had a great view on the lower parts and the opposite mountains, colored in green and red. And the clouds were quite low too on this rainy day. But still we got a few drops, not much else.

From the cliff-like bit we got down into a quite scary, ghostly forest, with lots of dead trees.

The road went from steep downhill to steep uphill and sometimes quite narrow and slippery. And from time to time we were going underneath huge hills, either on the valley side as well as on the mountain side which were immense while standing next to them. They had all kinds of colours, from vague pink to dark black, white’ish as well as dark orange.

The valley underneath still revealed we were above the river, we heard it but couldn’t see it. The opposite hills were impressive and in the far distance the clouds were above the sea and in the mountains, their bottoms below our altitude.

We even could see the parking lot below us, where we had parked. It was surrounded by a red/white tape which we could see from above, but we couldn’t see our car. So we knew we were close.
At one place further uphill the road got very narrow and we could only watch how deep it was below us.

From there on the forest became quite gray, the rocks between black and red, and it went all the way down.

In a little few gaps in the rocks, there were plants growing and even water was collected, attracting a lot of mosquitoes.
With the last bit of road it was really going downhill and we had problems going straight without sliding. Our knees were a bit weak after all that walking.

When we met the next plates, it didn’t say if we were going back to the parking lot or not. It only said Bonifatu, which was a wide description of the forest we came through. So while my mom wanted to take the red striped road going down, I went up to the orange/blue/red striped roadsigns where “Bonifatu” was marked as well as the GR’s down east. 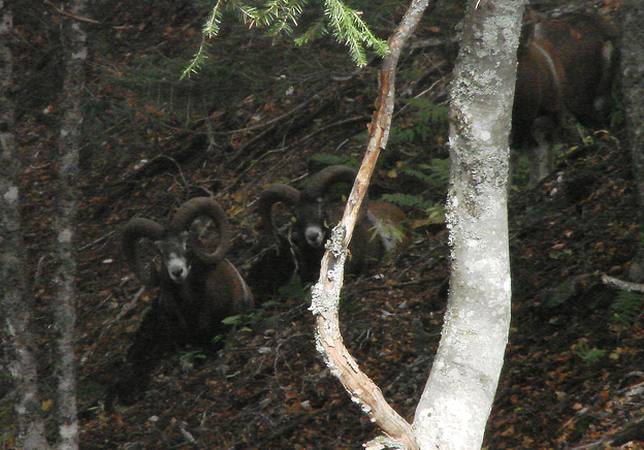 And then, we heard something we could not trace. I thought it was a deer but it was too loud. Then we thought it was a wild pig as it stampeded through the forest. But there were no piggy sounds. So we stood still and observed the area the sounds came from. After a few minutes we saw some light brown bodies coming down the hills towards us. My mom then saw a huge horn and suggested it were mouflons. And then, one of them started to hit a tree repeatedly, about 25 m away from us. A second one stared at us for a while and we could see a white snout in a dark face for a while. They went up a small track, in front of us, about 20m away and they continued their road uphill. We then heard a few big bangs, and it seemed they were testing their strengths against each other. What an amazing view! My mom said it was the first time she saw these creatures down here at all and was very pleasantly surprised as well.

A few hundred meters downhill I ran into a dutch family, something which is strangely enough already visible or audible a few tenths of meters beforehand. They wanted to walk uphill and when the kids hear about the mouflons they were off, where the parents had troubles keeping up.

Not much longer after the descend we reached the parking lot and I was very pleased to give my knees some rest.

We drove back behind the bright yellow truck of the local security department and my mom said she was hapy about that, as the cars driving uphill weren’t kind of keeping their side of the road. The roads she said were very typical, “old corsican”, with loads of bumps in it and very narrow. The bright yellow car in front of us kind of pushed the cars coming uphill into their side of the road, and we could safely continue our track downhill, past the aeroport de Calvi.

Back at the Camping we dropped the car and walked up to the Casino. We had quite a big hitlist of stuff we wanted to try, and for this evening we had the moules-a-la-calvi on the list. So after a while of walking backwards and forwards in the Casino we finally found what we were looking for. There was a water supplies area at the very back which we weren’t aware of, and they also had the sirop de menthe and the sirop d’anis which we were looking for.
As I forgot to weigh the onions we went back home with a big back of moules as well as a bagnat and some more stuff for dinner.

It took a while to get dinner ready, but then, after the violent attacks of the mosquitoes were gone and the wasps were sent to their local feast of moules which weren’t OK, we had our lovely dinner with fresh salad with local cheese, moules and as desert a lovely molten variety of chocolate mousse.

After all the fattening up I went up to the playfield again, together with a German friend who picked me up to fight against the french league. Maybe this time we could win.